The Green Spring Valley territory consists of about 35 miles square in Baltimore County and all of Carroll County. The home country and north country are open and rolling with great deal of grass. Some sections lying in between are rough and heavily wooded. Post-rail, coops, and board fences predominate. The east side of the country adjoins Elkridge-Harford Hunt; on the west and northwest side of the country adjoins Howard County Iron-Bridge Hunt and the Frederick county line.

Show Season Finale - GSVH had a stellar day at the Bryn Hound Show, winning almost every class we entered. 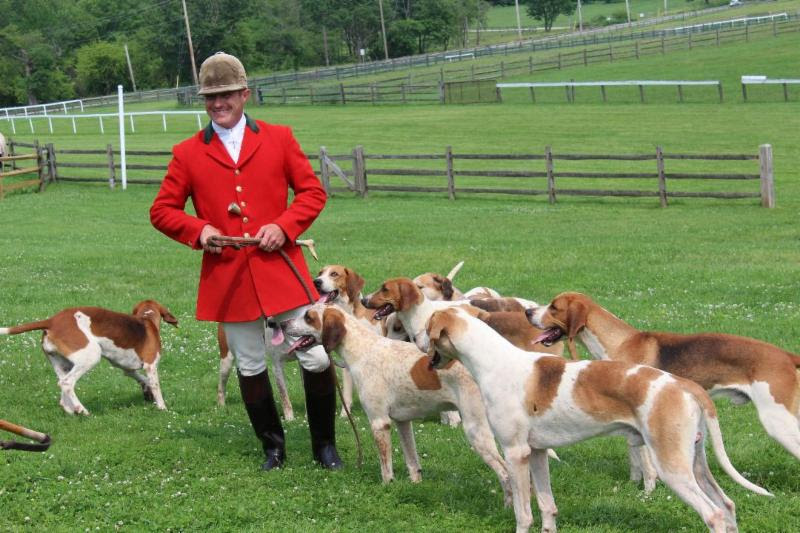 
Sammy Michel completed her Triple Crown, winning her Junior Handler division with Sapphire '18!   She had previously won at the Maryland Puppy Show and the Virginia Foxhound Show.

Karen Kandra Photo
Karen Kandra Photo     Sapphire and JImbo
Ashley Hubbard won the Robert M. Six Memorial Trophy, given to handler who, in the opinion of the judge, best demonstrates proficiency in showing hounds in the Crossbred ring.


To cap off the day, GSVH won the Edward S. Voss MFH Trophy for the Pack Class (Best Five Couple of Hounds).

Karen Kandra Photo
Well done to all the hounds, Ashley, Tim, Sammy and Doug for the many hours of practice and hard work that goes into successful show season!  We can't wait till August to see how the new entry will get started in the field!

Please mark your calendars and save Tuesday, June 18th, 6 P.M.,  for our Annual Puppy Auction and a Farewell to the Michel family, as Tim heads to the Bull Run Hunt to start his new job as their Huntsman.